Used daily by more than 400 million people, Arabic (the word meaning nomadic) was first spoken by nomadic tribes who occupied the area between Mesopotamia, the Lebanon mountains, the Sinai and northwestern Arabia. Much of what is known of written, classical (or old) Arabic comes from 7th century events recorded in the Qur’an, the holy book of the Islamic faith. Spoken all around the world, Arabic is the official language of Algeria, Egypt, Iraq, Jordan, Kuwait, Lebanon, Libya, Mauritania, Morocco, Oman, Saudi Arabia, Sudan, Syria, Tunisia, United Arab Emirates and Yemen. World Arabic Language Day marks the adoption in 1973 of Arabic as the sixth official language of the United Nations, and is to celebrate the diversity of its forms, classic or dialectal, from oral expression to poetic calligraphy, in fields as varied as architecture, poetry, philosophy and song. 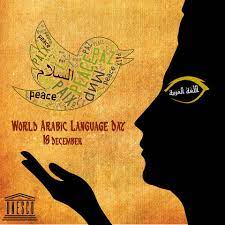